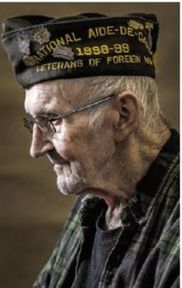 Portrait of a Veteran was saddened to learn of the passing of another local veteran
last week (August 22nd). We had the opportunity to sit down with Paul a while back to
hear about his military experiences. His story is below:

Nineteen-year-old Paul “Jed” Stebritz answered the call of duty for his country in January 1953 and joined the U.S. Army. The Korean War was raging in the Pacific, but after completing basic training, Jed found himself shipping out to Austria and
Germany to contribute to the war effort.

He remembers missing home and his family and friends during his time in the service, but looking back, he says he wouldn’t have done anything different. The most important lesson Jed learned while in the Army “was how to be organized.”
After serving his stint, Jed was honorably discharged on January 26th, 1956. But his commitment to the Armed
Services didn’t stop there. He continued to contribute his time as a member of Weiby-Johnson Post 5232 in Armstrong, Iowa, having served as Post Commander, among other duties. In the past he was known to put on his old Army uniform and attend the funerals of his fellow veterans that had passed.
Paul “Jed” Stebritz, age 82.
He was born in 1933 in Algona,
Iowa. Paul passed away August
22nd, 2017.